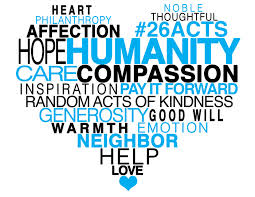 The other day while travelling home, I witness a kind gesture, it was a small one but It was surely appreciated by the person receiving it, and for some reason it made me smile and I felt somewhat happy and grateful although I was not the one receiving such gesture. It made me realize that, “yes” there are still some people out there that are genuinely kind-hearted and caring and all has not been lost in this world.

As I mentioned above I was on my way home, on the bus to be specific, when the woman in front of me took out her cell phone and made a phone call, the conversation which she was having seems to be one of importance and she carried it on. She then said her farewell and ended the call, however it seems like she forgot to mention a small detail to the person on the other end, so she redial the number in anticipation to relate whatever she had forgotten, while in the middle of the sentence, her phone cut off, apparently her credit ran out and she was not able to relate what she had intended to within the call. Low and behold, I saw a hand stretching out to her with a phone in it, it was the woman on her opposite side asking her if she will like a phone call.

I was amazed at this, it was just astonishing, and the thought was not even in my head at the moment. The woman, seems as she and all was surprised. She took the call and extended her sincere gratitude afterwards.

You may be saying to yourself, that’s nothing big, to speak about, but trust me, it was. It’s the meaning behind giving her the phone call that stood out the most.

Ask yourself this question, “When was the last time I did something nice for a complete stranger?” hHMMMm,, I am sure you cannot say. We need to be more kindhearted, whether it be a good morning or a smile as you pass someone on the street. It’s the simple things that makes a big difference.